‘Shareception’ – Nested chain-sharing of posts in Google+ visualised in ripples.  Coined by Mark Liederbach from University of Wisconsin-Whitewater.

While testing out the new link sharing feature we decided to see how far we can push the ripple before it becomes incoherent. We observed various usability elements and tried to connect practical elements of ripple concept to what Google wrote in their research papers.

After repeated sharing of our own post (up to seven levels) we decided that there is no quick limit to a number of nested shares one can make. Even only seven levels deep can potentially create terrific numbers of re-shares given the content popularity and connections of participants. Rather than polluting people’s walls with hundreds of shares we decided to ask Google for direct clarification of the issue instead.

There was 35 public shares with an average chain length of 4.71 and maximum ‘natural’ chain of 11 shares. We crashed Chrome once after playing the animated timeline though that could be attributed to many factors including available memory, other browser windows, flash instances and any active browser extensions.

Our first post was from Dejan SEO page, shared by myself (Dan Petrovic) and then Martin Reed. By that time we had multiple shares take place but for the sake of simplicity will focus on only one thread. The image below visualises the first few steps: 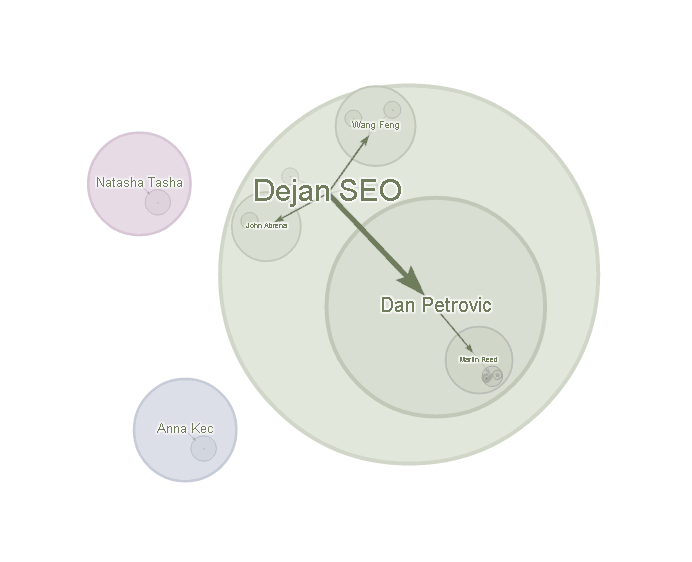 We found the mouse scroll button sensitivity too rapid for neat browsing and found the clicking within the desired circle to be a much more comfortable way of navigating through nested circles.

In the next image we’re seeing my first re-share of Martin’s re-share of my original share of the post. (Are you following?). Basically I am sharing the same post again, after another user has shared it from my Google+ wall. The ripple visualised it without any filtering or limitations. Here we’re starting to see more nested shares: 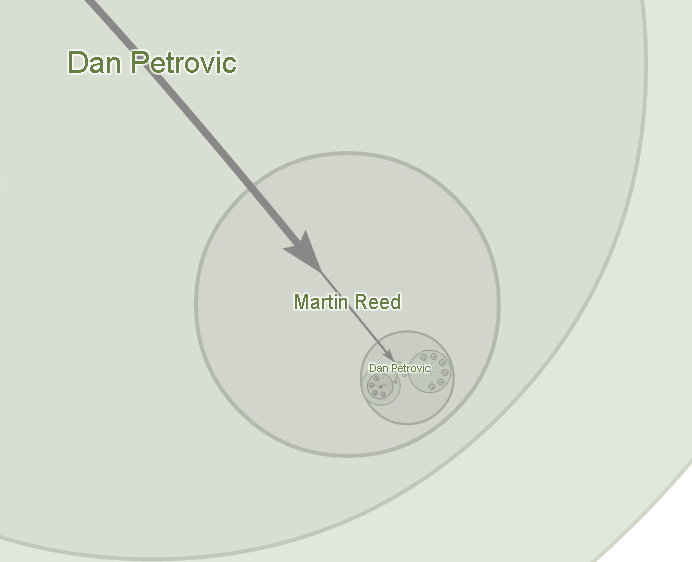 Here is where our spontaneous volunteers join in: John Doherty and Mark Traphagen. This was quite handy as it diversified what was going to be a simple experiment and we in fact discovered one interesting thing, we’ll need to zoom in a bit more for that. 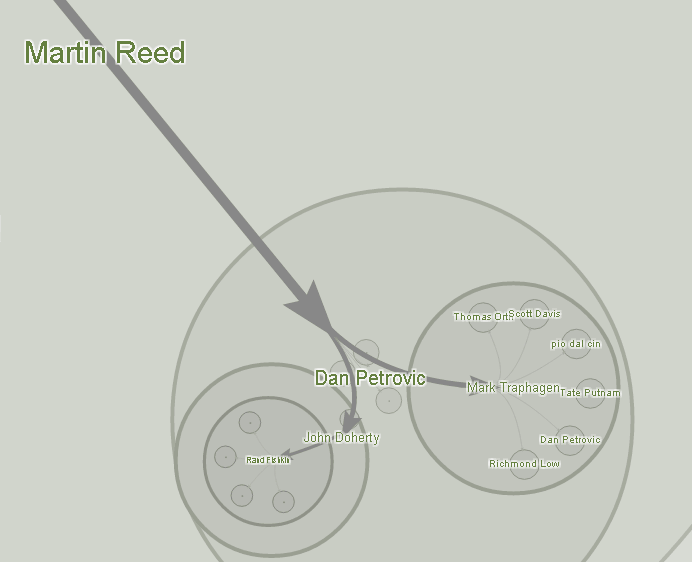 One of Rand Fishkin‘s re-shares has been deleted at one point in time but it remained in the ripple visualisation and on the side comments. 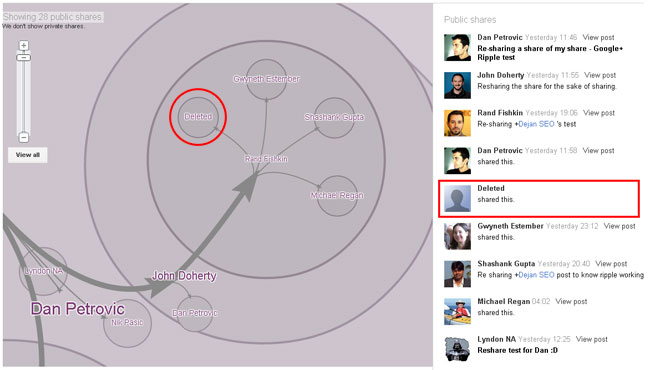 By removing nodes in what is essentially a share graph we lose valuable vertices / edges. Allowing this would break the ripple hierarchy and render the share graph incorrectly. One alternative rendering solution would be through re-assigning share nodes and allocating them a status of a fresh and independent share.

This would bring them to the surface of the share graph with a much larger visualisation when zoomed out to top level (Level 1). Arguable this is not the best choice as it may influence algorithmic treatment of shares, influences and connections within social circles. Some speculate that these factors already play role in internal Google+ rankings and may even be applied in some context to web search. We recommend to read over AJ Kohn’s Google+ guide for more detail.

In order to test perpetual self-sharing and its impact on graph rendering a new random node was selected and re-shared three times by the same user. In the next image we illustrate step 1 of the process which re-renders the otherwise symmetrical sphere layout graph: 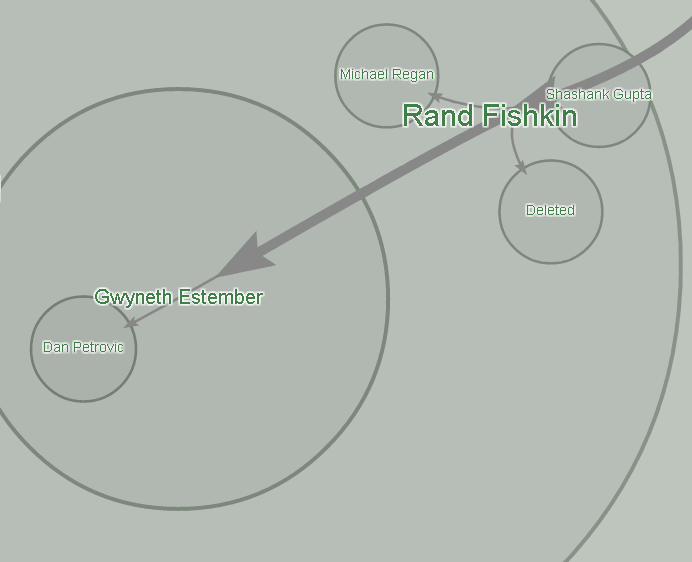 In the next image we’re seeing the single author shareception in action, with a single share nested multiple times to a (potential) infinity: 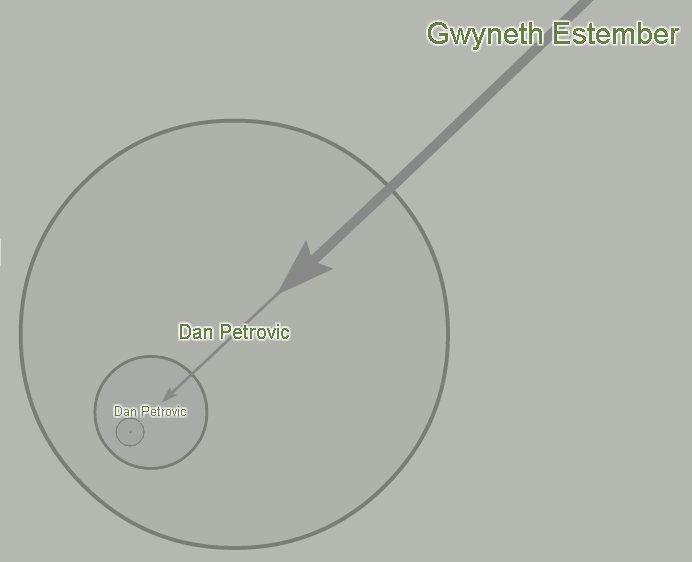 You bet. There probably isn’t another interactive graph structure that would be capable of displaying this type of relationship data in the same way. Additionally, the concept of “circles” works with nicely with the brand. Basically no matter what the graph always renders well and there is no way to make it look out of order (unless you think fractals are chaotic).

It’s worth noting that no private shares are displayed in the ripple. What happens to public re-shares of private shares? The owner of the original private share can re-share it to public again. Everyone else can do as far as “extended circles”. The post bounces to the top level of the graph though, which is really quite interesting considering that deleting of a share does not send it’s children back to top level. Whether this was done on purpose or by chance is unclear at this stage.

In the image below we illustrate the deep re-share surfacing up to top level: 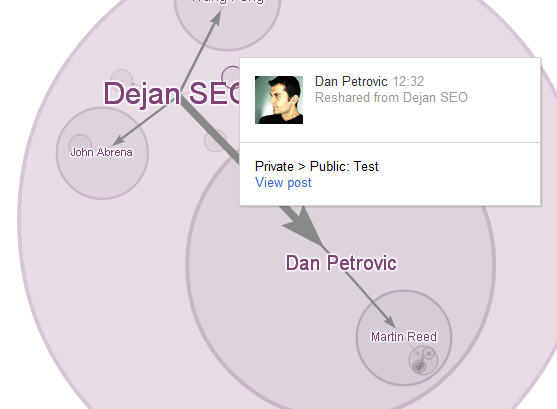 One thing that puzzles us is the somewhat random “You are here.” message which did not correlate with the sidebar view, our actual location or any other obvious factor.  When viewing the ripple from the post itself this is a useful option, however we entered the ripple view by entering it directly in the ripple visualisation screen. We would appreciate if someone can clarify how exactly this works.

We also noted that the ripples render with random layouts on refresh (try it).

It would be really cool to have an #anchor URL for the ripple able to jump to a specific spot in the ripple. We would also like to see mapping of a single path and allowing animated playback for that single path. Date selection could also be handy, for instance we’ve had two random shares by some of our staff members since 2 Nov 2011 and this skewed our animated playback action to a very rapid unfolding during the time of the experiment. Another cool option would be to see the list of all people who shared that URL/post in a neat list, that way I would have been able to list them in this article and then them individually for participating in the test (thanks a lot guys!). Finally, higher level of detail in statistics including the total direct and indirect reach.

The ripple effect in context of sharing of posts and links represents a way of social interaction on Google+ platform in addition to +1’s, +mentions and ‘encircling’. Google will use this information to build an implicit social graph based on our interactions with others and not necessarily by our choice and declaration (explicit social graph). 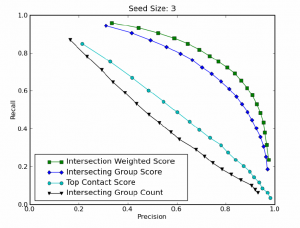 In 2010 a paper called “Suggesting Friends Using the Implicit Social Graph” [1] was presented at the 16th ACM SIGKDD Conference on Knowledge Discovery and Data Mining. The paper was written by six co-authors from Google Israel Research and Development Center in attempt to understand grouping of individuals online through their interactions.

The image on the left shows the precision/recall curves for the Friend Suggest algorithm with a seed of 3 contacts, run over the four different scoring functions. Note that the green curve represents the most successful scoring function described in the paper as the “Intersection Weighted Score”, (Section 3.3).

Researchers found that people rarely categorise their contacts into groups such as “family” and “co-workers” and were seeking a reliable interaction-based metrics to explore implicit connections without user’s input. Although the paper’s focus is on “friend suggestion” it’s not hard to imagine how this type of social graph analysis can be helpful in many other areas including targeted advertising.

An analysis of the email network of Google employees showed that over 40% of emails are sent to more than one recipient, and nearly 10% are sent to 5 or more recipients.”
The paper argues that private mode link sharing (Gmail) is fundamentally different than that of what they call “broadcast-style media” including Twitter and blogs. Limited group communication tends to be carefully targeted. Note that Google+ supports limited circle sharing.

If private link sharing has a special meaning to Google+, does that mean that they still do make a note of the sharing instances? We can be almost certain of that. Whether they will factor it into search results is yet to be seen. If the impact only affects those included in circles then there is no potential damage, however if internal conversations and link sharing can impact broader results (e.g. user is circled by someone, but that someone did not end up being included on the link sharing post). If it does work then we could all start creating private link sharing networks and boost our search results for those connected to us.

Our question is speculative in nature but worth thinking about:

Is link sharing visualisation in any way representative of the way Google may treat the shared link relevance?

What we mean by that is that if somebody significant and well connected is the last to share a link in a daisy chain of ten, the impact of that share will not be as high as the share at the beginning of the chain or the source itself. We had to zoom in a lot to get to that ripple level which in visual comparison to other ripples seems tiny.

To be fair, ripples are in fact relative to the initial sharer and their “downline”. We just don’t know as when you zoom in, other elements go away from the screen (by being too large to fit) rather than reducing in size. A warp focus visualisation of ripples may be more effective in examination of localised relevance of link sharing.

Arguably the effect of sharing may be related to connection distance and their ‘socialrank’.

Yes. Here’s the ripple of this article. Have fun!