Fifth Most Turbulent Day in Google This Year? False Alarm.

Update: Our team has investigated the jump in SERPs and found an interface change in Google’s search results. This is likely NOT an algorithmic change at Google. 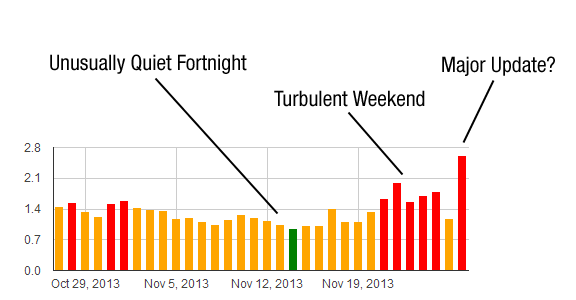 Algoroo measured an extremely high level of SERP flux in Google last night indicating that something significant has changed in the way search results are displayed. This may reflect internal changes such as ranking or search quality algorithm updates. The jump happened on the 27th of November, following an unusually quiet fortnight between the 3rd and 19th and a rather active weekend just days before the big SERP flux.

The volatility level measured was at 2.82 (or 2.61 when normalised) making it the fifth biggest recorded change in Google search results in 2013. Algoroo data relies on fluctuations in rankings of tens of thousands of organic positions primarily from Google.com.au and a fraction from Google.com.