Testing the impact of a planned update help this brand avoid making an update which would have led to millions in lost sales.

Updating category URLs to follow the structure of the breadcrumb will lead to increased organic traffic as Google will better understand the relationship between pages.

Prior to engaging Dejan the client implemented the new URL structure across an area of the website. To test the impact of the update they compared organic traffic before and after the event.

As traffic continued to increase the test was deemed a success. Dejan was retained shortly after and completed a secondary review.

Using a data analysis package (causal impact) for the R programming language we completed a review to identify what impact the update had on organic traffic.

Initially we identified the relationship that our updated section (solid black line) had with other areas of the site (dotted lines) during the pre-period. For example, when the traffic to the category represented by the dotted red line increased, we saw the same trend in the updated category.

As a result of this work we identified that although traffic to the category had continued to grow, in the absence of the update the rate of this growth would have been much higher.

During the 130-day post post period the client would have seen an extra 30,000 sessions to that area of the site. 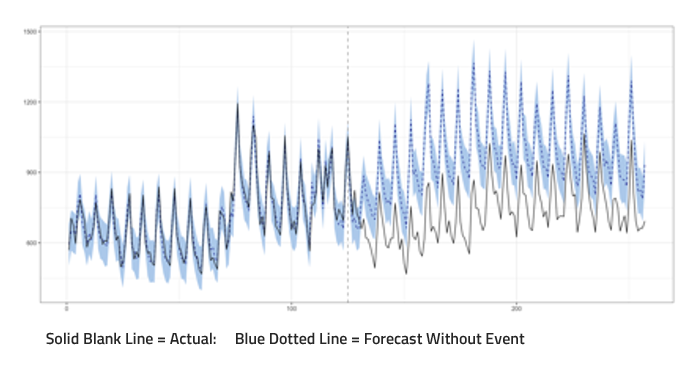 Using their average session value of $6.00 this equated to $120,000 of lost revenue to that section of the site alone.

If this update was rolled out across the complete website the lost revenue would have been millions of dollars.

Reviewing the value of brand bidding allowed us to redirect a clients limited budget to areas which provided a better ROI.

Turning off our exact match brand bidding would have minimal impact on traffic and conversion because most traffic would migrate to the organic listing.

In order to identify the level of traffic which migrates from the PPC advert to the organic listing we set a day on, day off schedule and compared the difference.

The day on, day off schedule allowed us to get an even number of on and off days, in addition to minimising the impact which monthly trends may have on the data.

Traffic successfully migrated from the paid to organic and the conversion rates of these channels are similar.

During a link acquisition project we identified that Xero had a large number of high authority external links referencing pages which responded with 404 errors.

The fact these links were referencing 404’s would have vastly impacted the value to the site as the authority wouldn’t be distributed.

Upon resolving the issue we developed an automatic alert in analytics using the referral report and a secondary dimension which monitors inbound links to 404 and automatically notifies the team so they can take action.

This work has helped them retain the links from site such as Inc, Square and Bluehost.

During a technical project for Octopus Deploy we found that a small change to the title template across the documentation area had resulted in a considerable drop in visibility and organic traffic.

This update was caused accidently during another update to the documentation section so went unnoticed.

After resolving the issues traffic recovered and we implemented automatic monitoring of key technical elements like the robots.txt, meta robots, canonicals and title tags to avoid future issues.